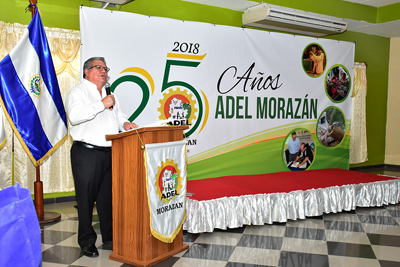 On June 8, 2018 the Local Economic Development Agency of Morazán (ADEL Morazán), held the celebration of its 25th Anniversary, with the aim of sharing achievements and learned lessons in the processes developed in the department of Morazán during this period .

Mr. Oscar Armando Chicas, president of the Board of Directors, made reference to the fact that ADEL Morazán is a private, non-profit, apolitical and participatory organization established in 1993, with the objective of contributing to self-sustained productive economic development, to promote human development within the framework of social stability, promoted through concertation mechanisms. 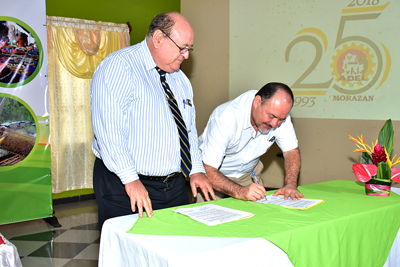 The Executive Director of ADEL Morazán, Alejandro Benítez, highlighted as main achievements: the generation of trust among the entrepreneurs; the improvement of competitiveness among micro and small companies, incidence in processes of public and private articulation at local and national level; creation of sub-sectorial tables and economic and productive forum of Morazán, transfer of knowledges and experiences to other Development Agencies and organizations at national and international level as well as collaboration with the School of Technical Careers of the University of El Salvador in Morazán.

During the event, four organizations, five individuals and the micro finance AMC have been awarded and also two outstanding people who have contributed to the institutional growth and development of the department.

With the objective of encouraging the business sector, four companies were awarded for their contribution to territorial development; in the sub-agricultural sector, the "Asociación Cooperativa de Producción Agropecuaria San Carlos Dos" and the "Asociación Empresarial de Productores Agropecuarios del Norte de Morazán (AEPANM)" have been awarded; in the sub sector of tourism, the companies "Cabañas y Mirador El Pericón" and "Hotel y Restaurante Perkin Lenca. More awards was assigned to Ms. Sandra Yanira Gómez, as business woman of the year 2017, and Mr. Salvador Márquez for his credit record and his loyalty to AMC de R.L.