Dominican Republic: In a ceremony held in the Eduardo Brito National Theater, the Corripio Foundation awarded  the Local Economic Development Agency of Valverde - ADELVA for "its constant work in articulating public, private and community sectors to promote territorial development and sustainable growth in the Valverde province, contributing to raise the levels of quality of life " 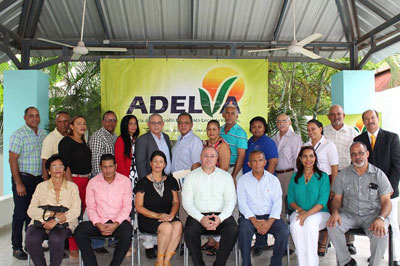 Since it was established in 2000, ADELVA has been promoting and implementing projects on micro-credit services for financial inclusion, promotion of endogenous potential for generating jobs and income, human rights, capacity building for human resources, solid waste management for environmental protection, gender equality and other initiatives for welfare and territorial development of the province.

In occasion of the "Un Siglo Compartido" award, the Corripio Foundation awarded various institutions from 32 provinces of the country for the work done, delivering a plaque and a donation of one million pesos.
ADELVA will invest the 75% of resources for inancial inclusion activities (Development Fund of Valverde and Emprende y Crece) and the remaining 25% in strengthening institutional component.

The award was received by an ADELVA delegation headed by the president, Juan Antonio Taveras, the vice president Mrs. Jacqueline Peña (mayor of the municipality of Esperanza), the former president of ADELVA and Vice President of the Association of Women Entrepreneurs of Mao, the teacher Nicelia Fernández. The Technical Team has been represented by Mr. Martin Peña executive director, Lic. Nicole Rodriguez, Franco Torres consultant in Local Development and Lic. Bianca Durán executive secretary.