With the application of 160 experiences from more than 15 countries in the Latin America and the Caribbean, it closes the 1st Regional Call "Experiences that make a difference: Gender Equality and Economic Empowerment of Women in the Territories of Latin America andthe Caribbean" that has been promoted and launched by UNDP within the framework of the DELGEN * initiative - Local Economic Development and Gender.

The experiences  come from diverse territories of the region and are led by multiple actors such as local, sub-regional and national governments, civil society organizations, foundations, private sector organizations and the Academy. 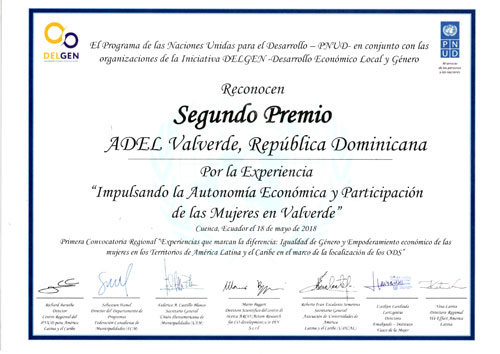 The local development agency ADELVA - which is part of the ILS LEDA network - has obtained the second place in this important prize for its experience in the execution of the project "Promoting Economic Autonomy and participation of Women in Valverde", implemented with the support of the UNDP and the Popular Foundation since the beginning of 2016.

The award organized by the United Nations Development Program and the DELGEN Initiative (Local Economic Development and Gender), was held within the framework of the IV Ibero-American Summit of Local Gender Agendas held in the department of Cuenca, Ecuador from the 15th to the 18th may.
The process of selecting good practices was based on an extensive analysis of 10 criteria;integrality, innovation, sustainability, multilevel / interinstitutional coordination, relevance, demonstrable impact, compliance with international commitments and replicability.
An Advisory Committee made up of six  international specialists identified the 10 finalist experiences that have been evaluated as successful in reducing in a sustainable and effective way the gender inequalities in the territories, favoring the economic empowerment of women and transforming gender relations existing in a specific context, through the generation of valuable learning that may be inspiring for other initiatives with similar characteristics and purposes.