In the framework of the Project “ODAK – Enbek-Kazakh Alliance for Sustainable Economic and Human Development”, funded by European Union and carried out by the KIP International School, Formaper - Agency of Milan Chamber of Commerce, and 2 local partners, IEAWO (International Environmental Association "Women of Orient") and FKF (Farmer of Kazakhstan Foundation), the assessment of the economic potential of the Enbek-Kazakh District has initiated, through the application of the ILS LEDA RESCO methodology. 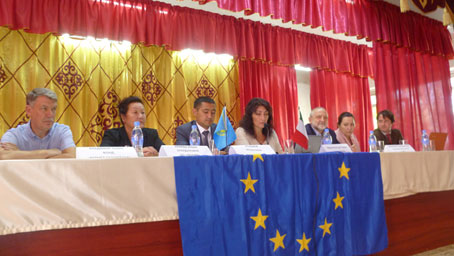 A KIP and Formaper mission was organised for providing support to the local partners and actors for evaluating the competitiveness and sustainability of 5 value chains: Vegetables (Tomatoes and Peppers), Apples, Soya and Maize, Milk and Meat.
The mission started with an initial seminar, chaired by the district government (Akimat), and realised at the Esik University, to which about 60 relevant actors of the district participated, such as functionaries of the district government, university professors, farmers of the above mentioned value chains, NGOs, and service providers.
Four full days were then dedicated to the participatory assessment of the five value chains, carried on by 4 Focus Groups workshops, each one including representatives of farmers, NGO, University, Financial Institutions, Akimat and Service providers.
The Focus Groups identified and shared the competitive advantages of each value chain, as well as its status (in terms of what it does exists and works and what does not) its sustainability comprehensive factors, its innovative potential and, finally, the obstacles that limit its full valorisation and growth.
The participants to the sessions were very satisfied (75% very much, 18% much, 3% enough) about the workshops.

KIP/ILS LEDA will now use the information obtained by the Focus Groups for elaborating a draft proposal of development strategies which will be discussed through a new Focus Groups workshop in a mission next January 2018.